STAP and the Nobel Prize Summit

Participants of a panel dialogue*, moderated by Rosina Bierbaum, Professor at University of Michigan and University of Maryland, member of the National Academy of Science (NAS), discussed a broad set of issues such as, existential risks, systems thinking, leapfrogging technologies in developing countries, the need for new narratives, clean electricity and other global solutions. As part of her introductory remarks, Professor Bierbaum said that “We’ve heard that the science needs are great and time to achieve global sustainability is short. We need to get to transformational change and not incrementally”. Dr. Bierbaum led the discussion focusing on science in service to society.

Marcia McNutt, President of NAS, former editor of Science, and past Director of the US Geological Survey, noted: “We have to help the developing world leapfrog technologies. We must help developing nations go towards solutions that are cheaper, better for the environment and better for the people themselves.”

Brian Schmidt, Professor and Vice Chancellor of Australian National University, member of the NAS, and 2011 Nobel Laureate in physics for providing evidence that expansion of the university is accelerating, stated: “We have huge opportunities looking at how to make cities more livable for humans and nature”.

Yuan Tseh Lee, Professor Emeritus at University of California, Berkley, member of NAS, and Nobel Laureate in chemistry (1986) for contributing to the dynamics of chemical elementary processes using crossed molecular beams, was quoted as saying: “We are citizens of a global system. We face global problems and we will need global solutions, like a global carbon tax.”

Hans Joachim Schellnhuber, Founding Director, Potsdam Institute for Climate Impacts Research (PIK), and winner of Volvo and Blue Planet prizes (a “simple physicist” in his words) noted that his goal for climate change is to “avoid the unmanageable, and to manage the unavoidable”.  "There are many existential systemic risks in the pipeline, and science has to look for them. Ten years ago it was a taboo to even think about these things. We have narrowly escaped, but now the next thing may emerge."

*You may view the entire webinar at this link, or this specific dialogue which begins at 1:27:08.

Professor Rosina Bierbaum of University of Michigan and University of Maryland moderated a second panel dialogue* on governance, inclusiveness and stewardship.

She was pleased to be able to have a conversation with four key panelists on what she calls “the enabling conditions for sustainability, governance, inclusiveness, stewardship, which has to accompany sound science and ready technologies to make progress quickly and transformatively, not incrementally”.

Joe Stiglitz, Nobel Laureate in economic sciences in 2001, Prof. Columbia University, Chief Economist at Roosevelt Institute, and Co-Chair of OECD Expert Group on the measure of economic performance and social progress, noted that “the only true and sustainable prosperity is shared prosperity”. He went on to point out that we are not valuing future generations enough, and argued that the concept of “social cost of carbon” should be closer to $100 per ton by 2030 than the $60 per ton previously estimated. He’s quoted as having said, “Politicians often talk about the burden of debt we might leave our children if we borrow too much, but those debts are dwarfed by the inequities that would arise if we leave them a devastated planet, a planet facing climate change where biodiversity has been destroyed, undermined, where the biosphere has been damaged.”

Jane Lubchenco, Deputy Director for Climate and Environment at the White House Office of Science and Technology Policy, Distinguished Professor at Oregon State University, winner of the Tyler Prize and Blue Planet awards, the State Department’s first envoy for the ocean, and the Former Director of NOAA, spoke about the need to both protect nature and manage wisely and more sustainably the areas outside protected areas. She also mentioned the increasing recognition of the importance of protected areas, but underscored that it shouldn't just be about quantity. The quality also matters; meaning, in areas that are not fully protected, the benefits are not as complete or wide-ranging. In paraphrasing a 1970s song by Joni Mitchell, Professor Lubchenco reminded us that “we don't know what we’ve got till it's gone”.

Gretchen Daily, Bing Professor of Environmental Science and Director of the Natural Capital Project (NatCap) at Stanford University, spoke about natural capital, valuation of ecosystem services and the need to ramp up public-private partnerships to invest in nature-based solutions. When asked by Professor Bierbaum how could we ramp up efforts to move simultaneously toward equity and sustainability, Professor Daily responded, “there are two revolutions underway: 1) at the core of science – developing new approaches to advance and gage science that’s developed with decision-makers and other users. It’s shining a light on humanity’s place in the web of life and all interdependence on well-being and development; and, 2) doing so in a way that is made accessible and actionable for decision-makers.”

“It is really inspirational that the UN just a month ago approved the new metric Gross Ecosystem Product,” she said. Gross Ecosystem Product is defined as the total value of final ecosystem goods and services supplied to human well-being in a region annually and is now experimentally being applied in countries like China and Colombia.

Eduardo Brondizio, Distinguished Professor of Anthropology, directs the Center for Analysis on Social Ecological Landscapes at Indiana University, focused on biosphere stewardship, inequalities and indigenous people. He emphasized a three-fold challenge in biosphere stewardship, which in order to be successful must be present: recognition, empathy and cooperation.

“Those suffering the most have contributed the least," he said. “The benefits and burdens of the development process put forward are unequally distributed within and across countries. Biodiversity stewardship is a stewardship of inequality. We can’t talk about biosphere stewardship without including indigenous people.”

*You may view the entire webinar at this link, or this specific dialogue which begins at 48:05. 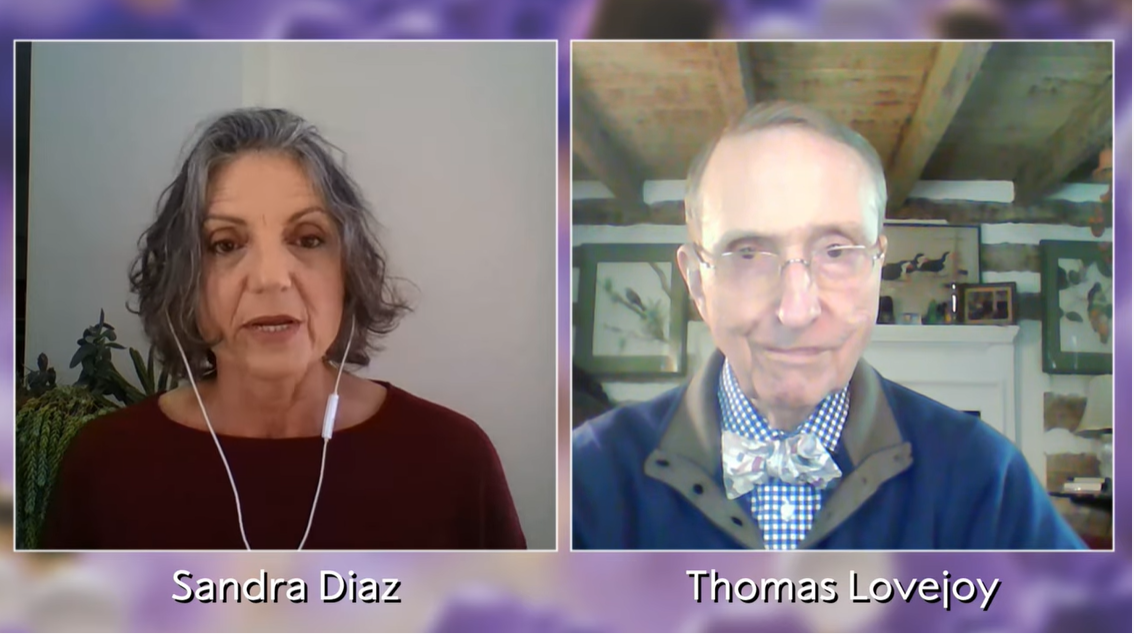 You may view the entire conversation at this link.