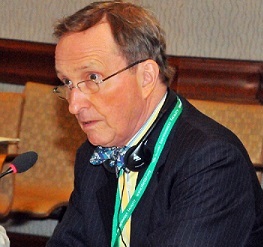 Tom Lovejoy, former Chair of STAP (2008 – 2012) and Senior Advisor to the current STAP Chair, passed away early on Christmas Day surrounded by his daughters and family, his thousands of books, a roaring fire, and in his own beloved log cabin (Drover's Rest).

Tom devoted his life to ensuring that the world understood the critical importance of preserving the natural world, recognizing before most that the conservation of biodiversity was also an act of safeguarding humanity. Recipient of the Blue Planet and Tyler Prizes, among many other professional honors during his long and distinguished career, Tom engaged with influencers and decision makers as easily as he did with the many students and activists that he inspired, a legacy that will continue to reach far and wide.

Although Tom is recognized for having coined the term “biological diversity” and for his many professional engagements in leading scientific endeavors to both understand and conserve biodiversity, including with WWF, The Smithsonian, and The World Bank (among many others), he will also be remembered for his life-long work in the Amazon which he loved. Through his work on the Minimum Critical Size of Ecosystems Project, the establishment of the Amazon Biodiversity Center, the half-century research at Camp-41, and his teaching, Tom inspired and mentored thousands of students and researchers. The field research that he led established that the fragmentation of natural systems results in cascading declines in species richness, and the unravelling of the biological integrity which underpins these systems.  Yet, Dr. Lovejoy always remained an optimist; indeed, he said optimism was “the only option.”

“I am sure that Tom's star will continue to burn brightly and guide us as we try to navigate our way to a more sustainable planet” said Rosina Bierbaum, STAP Chair, “We were so lucky to call him friend and mentor.   We are all so much better for having known this unique and wonderful man, and he will be sorely missed.”

Thomas E. Lovejoy III, an ecologist who dedicated his career to preserving the Amazon rainforest, dies at 80 (Washington Post)

Carter Roberts, President and CEO of WWF US, on the passing of Dr. Thomas Lovejoy